I had been living in Bamberg for a year without an idea that the Franconian city harbored such a treasure. And especially if you are visiting Bamberg for a day only, I want to make you aware of Bamberg’s Natural History Museum, which is the prettiest sight in town. In my humble opinion. But I let the picture speak for themselves. The Natural History Museum in Bamberg is a small local museum in the center that has a regional focus. It has a permanent exhibition on regional geology and biology with a Birds Hall as well as a few changing exhibitions throughout the year.

Where is the Natural History Museum in Bamberg?

You can find it just a little off of the main square, Maximiliansplatz. The Natual History Museum is right in the center of Bamberg.

Follow the street Fleischstraße as it bends and to your left, you will see a round archway with an open iron gate.

Head into the yard and you can see the museums doors to your left. If you keep walking on, you can step into a pretty backyard that is part of the university campus.

(I had my Hermione Granger photoshoot here, if you want to check it out. It is a very cosy and pretty yard to chill out for a bit in the shadow. Also, if you want, you can book me for your own photoshoot like that.)

History of the Natural History Museum

The building of the museum itself is steeped in history.

Once it was a Jesuit college, which also housed the Bamberg State Library between 1803 and 1966, which can now be found at the New Residence on the Domberg. In 1610, the members of the religious order moved to the former Carmelite monastery.

Then in 1791, the building of the former Jesuit college became a public museum.

The museum was founded as a nature cabinet by prince-archbishop Franz Ludwig von Erthal von Bamberg. It wasn’t so much a public museum back then, as more of an accessible archive for students and professors.

The purpose was not only to collect, categorize and research biology and geology for the Bishopric Bamberg. But also to combine research with teaching, which is what made the location a prime choice.

After the university was dissolved, the museum was rearranged and pomological samples added to the collection in 1803. At that point, it was renamed to the Lindersche Naturalienkabinettsstiftung (“The Linder Foundation Of Natural Produce”) as Benedictine priest Dionysius Linder donated the collections of the nature cabinet in Banz and took charge.

Over the years, the catalogue was constantly expanded  by his successors and nowadays is part of the Lyceum Foundation Bamberg.

Up until the 20th century, the focus was worldwide biodiversity, which then changed to more of a regional focus under the leadership of Dr. Theodor Schneid. He added to it the most important entomological regional collection of Bavaria, which comprises around 60.000 local insects and focuses on larger ones (Hymenoptera).

Even today, the team behind the museum are furthering research and working on the ground. In recent years, samples of the quarry Wattendorf have been added to the collection, including the world’s largest intact fossilized Jurassic turtle.

local bird
in a glass cabinet

view from balcony
onto lower level

What makes the Bird Hall so special?

Now that you know how fascinating and ever changing the building’s history has been, let’s talk about the significance and sheer splendor that is the Vogelsaal (Birds Hall).

First, it is one of the world’s oldest and most beautiful natural history halls in the world. It’s like a museum inside the main museum and has an entirely different vibe and feel to typical museums.

The hall is the only originally kept museum show room from the 19th century. It was never modernized.

Furthermore, the arrangement makes it less about dryly learning new information and more about taking nature in directly up close and preserving it visually, not through text. And the focus lies on birds.

This way, you do not only see thousands of birds in their taxidermized form preserved for future generations. But it’s a history lesson in how rich, scientifically-inclined people used to present their private collections as well.

Those were not just invaluable due to their extent but also the fact that world travel and import was still a big undertaking and incredible privilege, let alone having the space to create their own exclusive viewing rooms. So having a semi-public museum and with such grandeur was extremely impressive. And great for furthering academic research.

The animals on display are not just local, but you can see specimens way from across and beyond Europe as well.

What are the changing exhibitions about?

Besides the fixed bird collection and regional nature exhibition in the Nature Museum of Bamberg, you can experience temporary exhibitions.

These can be, for instance, photograph galleries, but always center on nature and wildlife. Throughout the year, there are two to three different and new exhibitions set up.

What can you see in the rest of the museum?

Like I said before, the Birds Hall is only part of the museum. The other part guides you through various stages and areas of the region’s natural history and geology.

On display, you can find many of the museum’s 200,000 collection items from the areas of geology, mineralogy, paleontology, botany and zoology.

If you have strolled around the nearby street Grüner Markt during the day, you might have seen local produce on sale. Some of it features only locally found and grown varieties. The museum has dedicated a part to preserving such autochthonic varieties. You can find wax replicas of local fruit samples, many of which aren’t grown anymore.

Annemarie started this Bamberg travel blog to inform tourists about all the amazing sights that Bamberg has to offer: from historical buildings, stunning viewpoints to mouth-watering regional food. She works as a local vacation photographer (you can hire her!) and knows all the best spots (she's a great guide too!).

Feel free to book her or send her an email through us if you have any questions about Bamberg and travel in the region. (Did we mention she is a world traveller and has worked as a travel blogger for almost a decade too?) 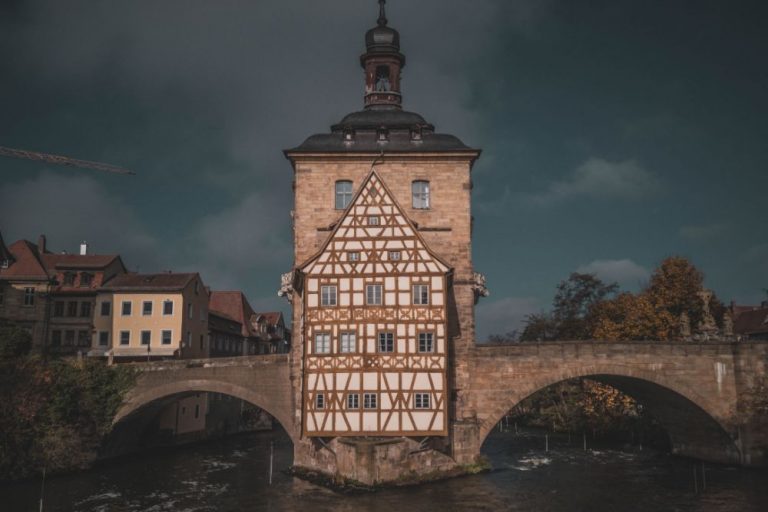 If you are planning a quick Bamberg day trip, here is a handy itinerary for you to see most of the sights comfortably. As suggested by a local. 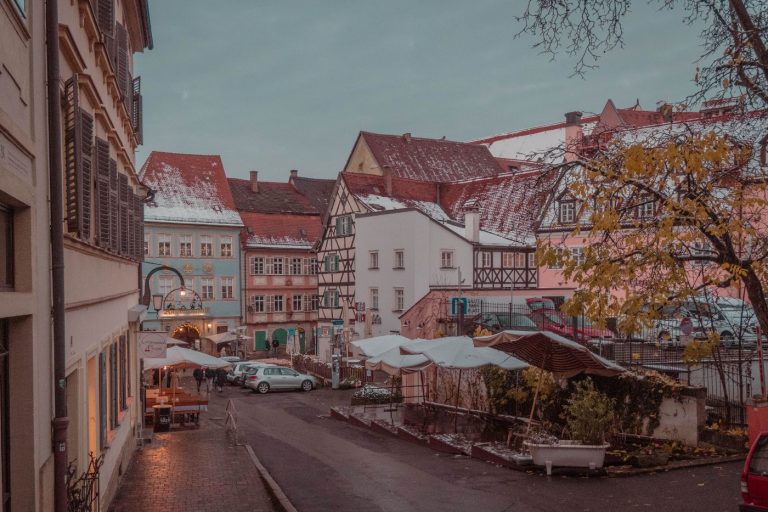 Here’s where to go shopping at the cutest shops in Bamberg. Whether it’s for unique souvenirs, gorgeous decor or unique local handicraft, here are the best places. 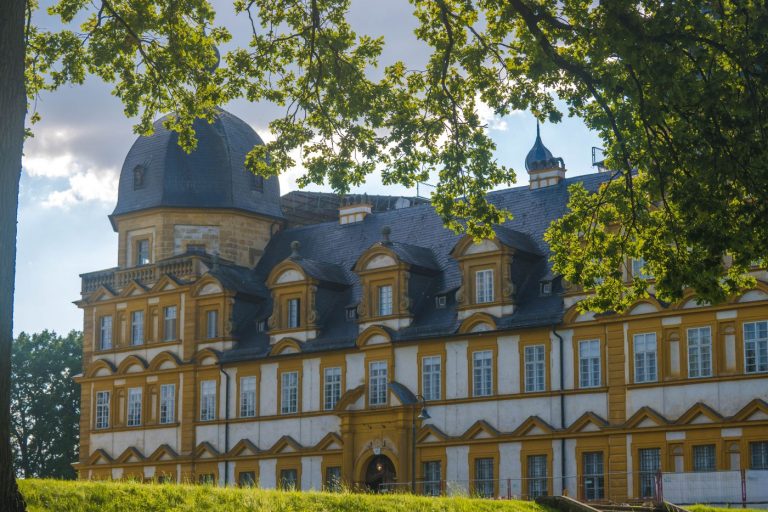 If you are planning to visit Castles in Bamberg, visit Seehof Castle. It’s stunning yellow and white architecure and ornamental gardens make for a great outing. 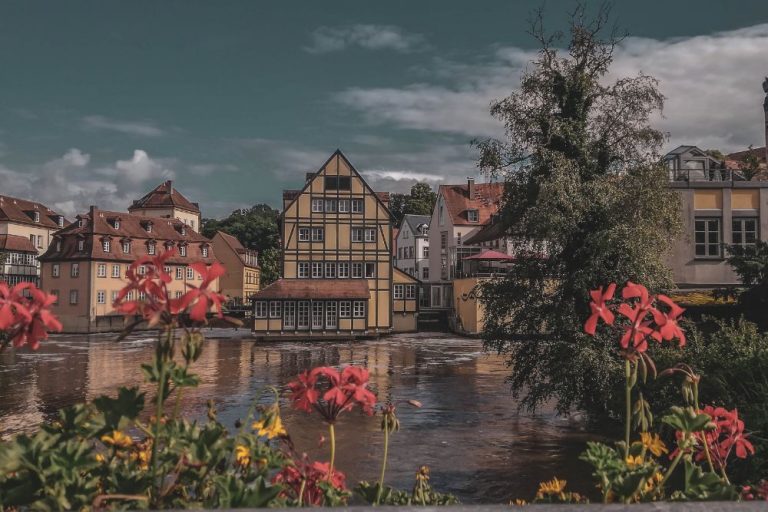 If you’re traveling Bavaria, stop in the picturesque Bamberg! And if you are here with your partner, these romantic spots for couple photos in Bamberg are a must.